No idea for new classes? I got two on the top of my head!

I have two ideas for a new class: I think a problem in Wow, unfortunately not reversible, is too many races can be too many classes. Either way, I have a few ideas for two classes.

I came up with these idea by the top of my head, so these are no where near developed ideas. They are ideas I've had for a while, but I have not looked into the specifics. I find it very romantic thinking about two new classes, with very different kits being added to the game: I have not spent a huge amount of time writing or taking the classes into consideration for example PVP balance and so on.

I have always loved the Hybrid classes from vanilla, so the two classes have some sense of hybrid playstyle to them.

Again I would like to state, these are just ideas! Not developed, ideas for inspiration as crazy as they may be. I came up with these as a desired gameplay I personally would enjoy playing, primarily being hybrid classes adapting to boss fights and situations more than a perfect rotation.

A class which is along the lines of Engineering back when it was "fun" in Burning Crusade.

A class that uses bombs, rockets and inventions for weapons and defenses. Each ability is very varied and has chances to either do bonus damage on single target, or bonus damage on AoE and so on.

The Tinker will not use weapons, but 2x offhand items and wearing Cloth or perhaps leather armor.

Direct Bombing, you directly throw bombs, rockets etc. with mainly passive bonuses to your abilities, good for leveling and PVP. Direct bombing bombs will slow-down or stun the target when the timer runs out, so it has stuns which can be used instantly, or longer stuns that has a charge-up time.

Detonation:  You throw your abilities in different orders to create combo points which will trigger different type of damage output, You mix abilities between rockets and bombs and you detonate them after building up 5 of them, Depending on how you combine them you can get, A high dmg Dot (like Rip) on the boss, High damage attack (like Ferocious bite) or quicker attack speed (like Savage roar)

Overall certain abilities have chances of creating a shield or increase damage. So a class that is a bit based on mixed ability results, but has a lot of abilities which would suit Gnomes and Goblins for sure!


Crusader is essentially a healing/tank class that uses melee attacks to heal. It does not use mana and cannot heal as a regular healer. Instead he is dependent to heal when using combo points and hitting melee attacks.

It is doing mediocre melee damage, but heals allies - just like a feral druid when using Nature's vigil. When using abilities, you will deal damage to the boss. The damage and healing is limited, but combined would be a good option for a larger raid, but not too viable in PVP, besides having a lot of control and CC abilities, making it decent for a team of 3 or 5.

A Crusader will be a class that can take up an extra slot for a healer, or a dps. So instead of that extra druid healer in a raid, ending a fight on half mana. A crusader can contribute to both healing and dps. It is a class that is very good at adapting a raid between bosses, based on the amount of damage the raid would take. Whether that is direct or aoe heal.

Here are a few examples of how a melee-healer could work.

Tank (Focused on damage reduction, dealing less damage, but more healing)
The crusader as tank works much in a sense of a Paladin, but deals lesser damage, but generates threat while also using heals. A Crusader tank would be very good in a group of melees and on melee bosses. A crusader tank would take a bit more damage than regular tanks, but as it heals the melee group, then raid healers can focus healing the Crusader more.

PVE (Combined melee and healing)The Crusader will always be in a melee group, for each hit the raid will heal in smaller amounts. For each ability combo points will be built up, and can be released as various abilities, depending on the stage of the boss fight and how much healing is required. For example if a group is at full health, you release a shield instead of a heal. So it is up to the player to analyze the situation of a fight before using the abilities.

PVP (Focused on control, short burst heals or short burst damage)
The crusader will have more powerful abilities, but on longer cooldown. The abilities will only affect a few targets instead of many. The Crusader PVP will unlock a taunt ability that forces an enemy player to force attack him for x amount of seconds, which forces an engagement between a player an a Crusader. Great for players who try to escape to heal, and the crusader can follow-up abilities that hit hard, and self-heal the crusader more. Such as abilities shared by Death Knights.

As I recently started working full time on games.  I no longer have time for Commissions. I will however get back to doing paid commissions sometime in 2015.

Hopefully we will also see a change in games. Less monitization, more gameplay and more fun, so it's not all going to go up in graphics, specs and cash! 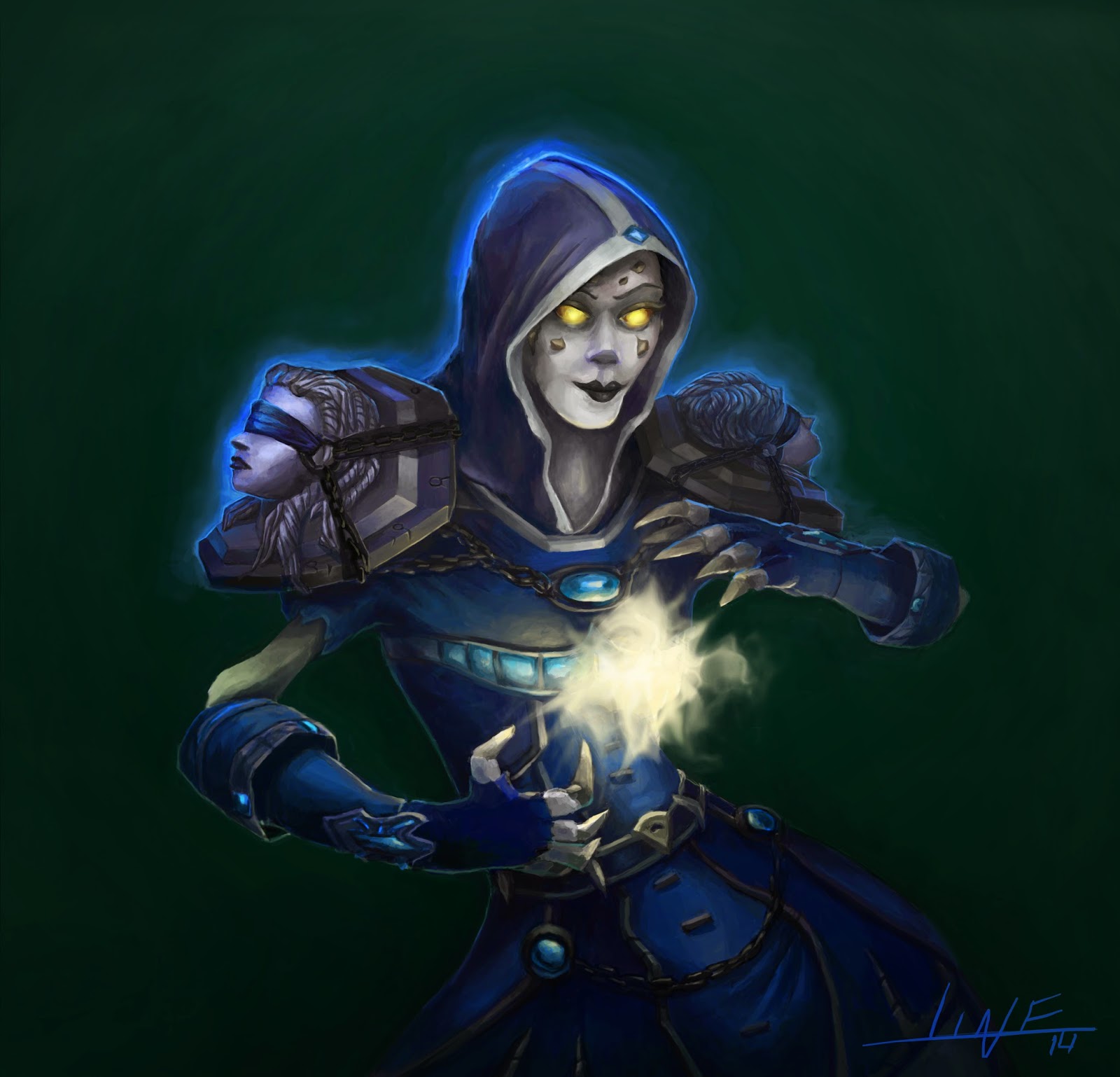 So! I've found a new thing I like to do

Hearthstone cards! - I created this card in a twitter give away!

So this is the first - in a hopefully long series of cards I'll create! - Obviously these aren't official cards. 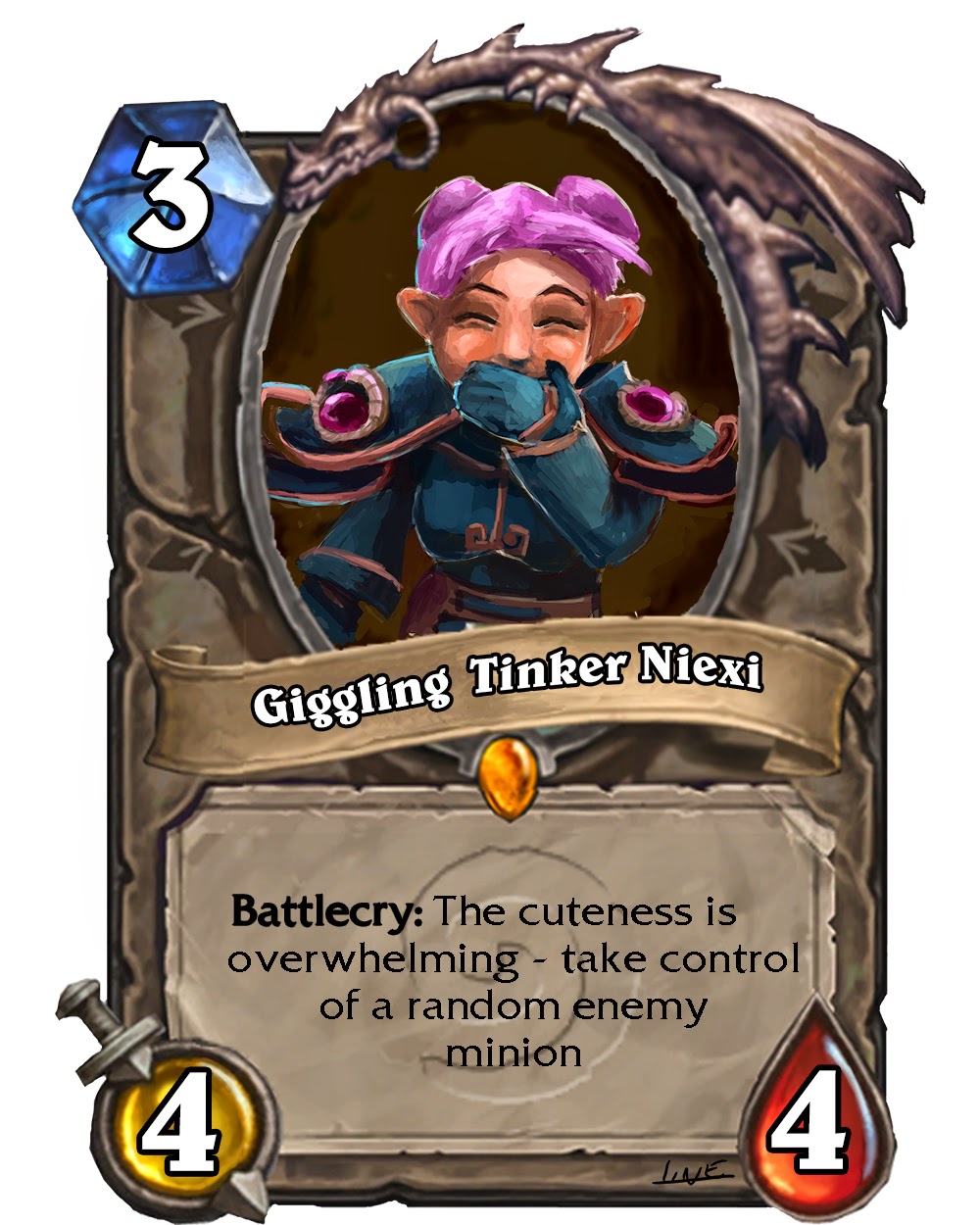 As I recently got involved with a Blizzard Arcade project, touching up some art work, and I was offered a 2000 dollars freelance job, I have decided to stop my commissions.

University is taking up most of my time as well, so I doubt I'll be doing commissions again any time soon.


But more news on that front in a couple of months.


I still need to find the time to write about that Karazhan Review.
Posted by Raidlist at 11:04 PM No comments:

US more open minded than EU?

I have been leading my only Druid guild for more than 8 years now. I have experienced a lot, have had a lot of fun and received a lot of input.
Some of those input and experiences are, that US wow players seem to be more interested in alternative gameplay than Europeans. On the other Hans, Europeans seem to be more competitive than the US.
Obviously these are massive generalizations and they are purely based on one single elements, which is how people have responded to my only Druid guild over the years.

More than three quarters contacted me regarding my guild, are US. More US seem to be appealed to the idea of only druids than EU.

it is a strange one, and a bit sad as well. Currently my guild has not grown for about half a year, the size remain the same. It is unfortunate, as I know many are interested in joining but can't, due to the split between EU and US. It somewhat also makes me wonder, how come the EU don't find single class guilds appealing. Perhaps it is the competitive and gear aspect which drives a lot of EU, while maybe for the US it is the fun factor and the lifestyle of wow, so to speak.

Again, these are very generalized, and I know all types of people are everywhere. But it still makes me wonder sometimes what my guild would have become, in case it was not EU but American?

That said, maybe it would be a possibility to launch a Druids of the Beast on the US one day, in case the possibility, support and help arrives.

Just thoughts of the night.
Posted by Raidlist at 12:23 AM 1 comment:

Guides and tips to Guild Leading

Here you can find the list of all my guides and posts regarding guild leading.

I use this page to express myself, my thoughts and opinions. Everything in-between my ears.
I have been leading clans and guilds sucessfully for 10 years. I will share advice and tips based on my experience and view as a Guild Master, in case you need it.
I also do art requests of your MMORPG characters n so on, you can read more bout that on the pages..
Sorry in advance for my crappy English. It's my 2ndish language - and I'm constantly trying to improve it. So feel free to poke me, in case I write crap. :D Always room for improvement.